A Threat at Arm's Length 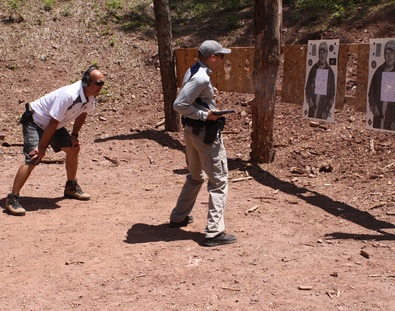 A number of factors come into play as to why we may find ourselves in a life threatening situation at very close quarters. Maybe your "radar" was off and a mugger got within arms length. Maybe a conversation lead to an argument then to an assault. We review close quarters in out Defensive Carry classes but time needs to be spent on the range practicing them. You need to realize that you first must address the the threat's weapon with your off hand before trying to draw. You also need to have proficiency in point shooting with your gun indexed on your hip or chest.

Remember, you need to negate the attacker's weapon before trying to draw. If the weapon is static, it's fairly easy to get to your gun. If the weapon is in motion, it gets complex. Keep in mind that complying with an assailant does not guarantee your well-being such as handing over your wallet. NEVER allow an an attacker to move you to a more remote location. Fight back with everything you have while in the more public area! If you get moved to another quiet location, it will not usually end well for you.

A basic motion while under attack at close range is to bring your off hand to your head and/or face rather than your chest. Keeping your finger off the trigger until ready to shoot is critical to your health this point as there is a very high chance you will be muzzling yourself while deflecting the attack and getting your gun up. With practice, you can reduce this possibility by indexing your gun against your hip or chest.
Indexing your gun is a natural movement when you have a proper draw. Once you gun is out and clear of the holster, simply cant your wrist outward and keep the butt of the gun against your hip. This will ensure the slide does not get hung up in your clothes. Simply twist your torso on the gun side toward the attacker and fire. Indexing the gun to your chest involves no twisting. Your strong elbow should be in tight to your body and your wrist locked in a firm one-handed grip. The gun will be on target presuming the threat is directly in front of you.

Indexing the gun has two major advantages.  By keeping the gun tight to your body, you can retain it from a possible attempt to grab it by the bad guy. Second, by having practiced at the range with gun indexed, you can predict where your shots will hit. While in tight to your body and indexed, your body will "aim" the gun for you. Your gun may shoot low from either position but pelvic shots are a very acceptable secondary target. It may not immediately neutralize your threat, but several shots will certainly "sit" him down as his legs will not be capable of supporting his weight. The threat can be dealt with a bit easier if he can't walk!

I tell my students that during an attack, a switch needs to be turned on from being defensive to being offensive. You are in a fight for your life and being defensive is no way to win a close quarter gunfight. Being aggressive wins. Many of the fundamentals of shooting will not apply. What will apply is sheer ferocity and violence against the attackers violence. Remember, the assailant probably didn't expect a fight!
Move forward, and strike out with your off hand. There are no rules in a fight like this. Drive the heel of your hand up into his throat, drive the head back and run forward. Gouge the eyes if you can while your at it. Your assailant WILL move back giving you the upper hand giving you time to draw your gun. The bad guy will be more concerned about regaining his balance than hurting you.

The fact that you're an awesome shot and won two matches last week will have little bearing on the outcome of a close quarter attack. You will need to have trained specifically for this unforgiving and brutal type of combat. Remember, address the bad guy's weapon before going for your gun. Be aggressive and have the mindset that you will not give up. Turn the tables on the attacker and fight back with all the ferocity you can muster. After all, it's your life and possibly the lives of your loved ones that are on the line.

SHARE ON
TwitterFacebookLinkedInPin It
<< In defensive shooting, missing your target has consequences...
There is Such a Thing as Too Fast... >>
Recent Posts
Website Links
Never miss a class!
JOIN OUR NEWSLETTER