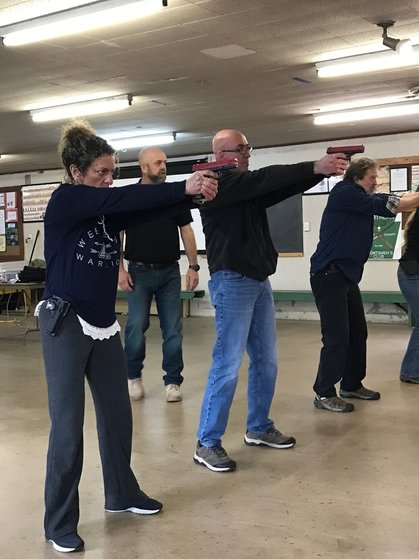 A bad guy’s actions can take thousands of different paths. There is no map that says if this happens you have to do this, or if this scenario occurs that you respond with this variant. Most violent confrontations are not black and white. Training in a classroom does not teach you these variables. The only benefit to that type of training is that at least you are thinking about different strategies. Bad guys do not announce their intentions and are very clever at hiding their intentions until the last second. That will be all the time you will have to make a life or death decision. You can talk all day about condition yellow, or red, or whatever, but unless you’ve programmed yourself to quick reaction, you can be seriously injured or killed while trying to figure it out.

If a stranger approaches you with his hand in his pocket and says, “Your money or your life” - a reasonable person would hand over the money. Consider that you’ve been caught by surprise and you didn’t see this coming. There is no way you can get to your gun if what is in his pocket is a gun. He’s given you a choice and I would choose to live. Presuming he doesn’t shoot you, by complying you’ve actually saved yourself a ton of money and heartache.

You didn’t have shoot and kill him. You’re not arrested, or on the evening news. You still have your job, your friends, your own life. You’re not paying for psychological counseling. All of the aforementioned things can become your reality after a fatal defensive shooting.

Another unbelievable thing can happen after a defensive shooting. The bad guy, drug warped, scum of the earth is depicted by the media as a wonderful guy. His family and friends and preacher come out of the woodwork saying how he was getting his life together and was going to spend time with his children. How could someone have killed him? Now you need spend over $75,000 to defend the civil case against you that is being tried in the media.

If you get true indicators during an assault as to the bad guy’s intentions such as being herded into a freezer, forced in to a vehicle, shoved down a dark alley, or to kneel - FIGHT! Fight with your last breath. You are about to be killed.

The problem is the gray ares when the threat is not specific such as an aggressive panhandler. Is he just being persistent or is he going to rob you? If you don’t stand firm, he may just try to rob you even if that wasn’t his original intention because you seem to be an easy mark.

In a situation like the previous one, you should act rude, firm, abrupt, and short. A bad guy is counting on your resistance to such behavior to get inside your defensive zone and attack you. Bad guys use societal rules against us.

If a threatening person approaches you, ignore him. Move away without running. Move to a safer more crowed spot. Now the threat has to make a decision to pursue you. In most cases he will not. If he does, hopefully there are people around that can make it harder for the threat. At a minimum, you’re in a better place to deal with the situation at hand.

Avoidance is not being a coward. It is being smart. Avoiding a confrontation requires thought. Stopping one before it starts takes effort and skill. Firearms training and tactics are important for your self-defense plan. Keep in mind that some time should be spent in your planning to learn how to be rude and ignore people while keeping aware of their presence and intent.

SHARE ON
TwitterFacebookLinkedInPin It
<< Point Shooting: Does it work? Do you know what it is?
Anti-Gun Sentiment on the Intarwebs… >>
Recent Posts
Website Links
Never miss a class!
JOIN OUR NEWSLETTER