Learn to see the light... 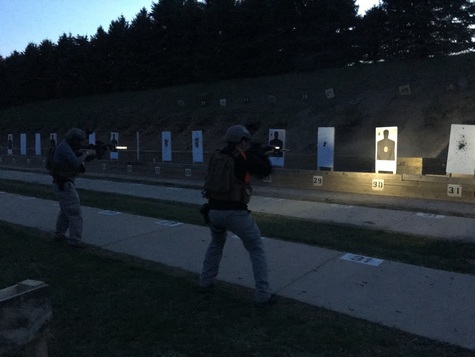 In a self defense scenario, your flashlight is as important as your choice of firearm. I find it alarming that so few people are trained in its use. Granted, it's difficult to find low light and darkness training offered. We teach it from time to time, both live fire and with laser training guns. We are currently working with our "home" gun club to allow to us teach low light training on a regular basis.

Criminals prefer darkness to hide their evil intent. More police are killed in the hours of darkness than during the day, yet few cops are trained in proper light deployment. Your average defensive hand gunner receives even less training in low light conditions. Consider how often you are in a dimly lit setting, whether it be in your home, out for the evening, etc. — the need for training becomes apparent. See our blog posts from December 2014 for more information.

For many, low light shooting training is inconvenient. Training is difficult to find (we offer it). It's a late class depending on the time of the year. It involves extra safety preparation to hold the class as well as to attend. Many ranges are afraid of offending the neighbors with shooting after dark. The excuses go on but the need remains. If you do not have a tactical flashlight and know how to use it, or have a weapon mounted light and are not familiar with its operation, you are not prepared to defend yourself. It's that simple.

If you keep a gun with the intent of self defense, you need to be prepared to use light with your gun. The primary reason is to identify a threat. A secondary reason would be to disrupt the bad guy's vision. Before you press your trigger in self-defense you damn well better be sure that the person at the end of your muzzle is actually a deadly threat. Shining light on a possible threat will also show you if that's a gun in his hand or a cell phone. Without good visual cues, how can one make a high stress split-second decision to shoot or don't shoot?

OK. Great. You have a light. Owning it and deploying it are very different things. For instance, shine your light on the threats face rather than his torso. You will still see his hands and what he doing with the added benefit of blinding him.
During a recent night class, I demonstrated this to the students by standing about 50 feet from them. I had them spot my face with a light and they were able to identify with 100% certainty what was in my hand. I held either a knife, keys, gun. Cell phone, etc. I was blinded each time the light was shone on my face for at least 2 seconds. This then gave the students time to move off the "X" and determine what their next course of action would be.

I saw skepticism in some of the students regarding the power of their lights. So we ran a drill.
Safely, with a range safety officer spotting us, I had the students step up to the 5 yard line. I shined my 600 lumen light directly in their faces, had them draw and fire at their target once. A few students hit their target but most did not. This drill drove home the added benefit of blinding a threat.

At home, without ammo, you can practice techniques once they are learned. If it's not part of your training, it needs to be! As important as it is to run your gun while moving and practicing technique on a nice sunny day at the 4 square range, it's even more important to dedicate time running your gun with a light in the dark. Your end goal is to have the confidence to know that that threats hidden in the dark should fear YOU!

SHARE ON
TwitterFacebookLinkedInPin It
<< Anti-Gun Sentiment on the Intarwebs…
Appendix Carry - Is it right for you? >>
Recent Posts
Website Links
Never miss a class!
JOIN OUR NEWSLETTER