See the Whole Picture... Know how to reload reflexively 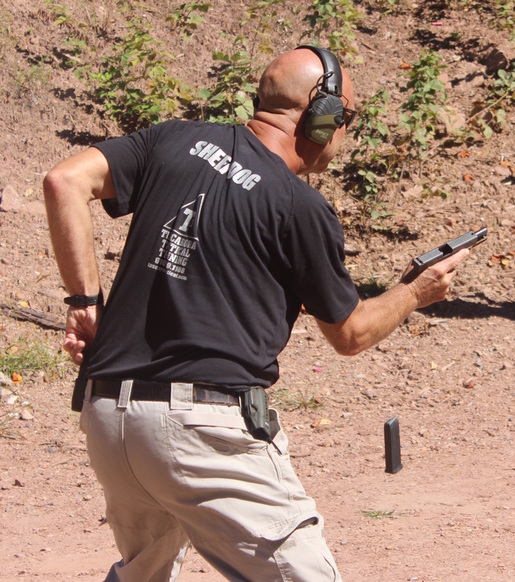 The two basic elements of using your pistol in a self-defense encounter are technique and tactics. These make up the foundation of a solid defensive shooter. If you do not have solid technique, you will never have the ability to deploy sound tactics. Technique includes basic physical movements such as drawing, front sight focus, and magazine changes. Tactics are actions one needs to take in an encounter such as moving to cover, improving your position, and creating distance.
In a recent class I taught, some of the students were having difficulty changing their magazines. Two of them wanted to "skip" that part so the class could keep moving. Not a good idea. Whether you are topping off your gun or doing a fighting reload, the magazine change should be completed without thought. Automatic.
First, if you are a righty, carry your mags on your left side. Carry them vertically in a pouch with the bullets facing forward. When you grab a fresh mag, run your index finger along the front edge of the mag and have the baseplate rest in the palm of your hand. Now you know which way is forward.
Reloading your pistol is predictable and should be practiced to the point it is completely reflexive - muscle memory. If reloading your sidearm is not second nature, it will take too much of your concentration and focus during a deadly encounter. When lead is flying you will need to focus on your adversary and your next move. Not on your magazine that "won't go in."
Your tactics are much more dynamic and fluid.The correct tactic in one scenario could prove to be deadly in another. For instance, if you are a legally armed citizen faced with a potentially deadly threat, a sensible tactic may be to draw your pistol and order the bad guy to the ground.
The bad guy's subsequent reactions then dictate your tactics. If he complies, your continued verbal direction from a  superior position would be the course of action. However, if he draws a gun, shooting him would be appropriate and necessary. If after the threat draws on you, your continued verbal commands would prove deadly.
So meanwhile, as this is all taking place, you need to see and process details such as: what type of weapon does he have? Does he have body armor on? Are there innocents around? Did your shots completely stop him? Is there cover close by?
If you are distracted by techniques such as topping off your pistol or a fighting reload, you may miss the details that could potentially end your life! Keep both eyes open, break your tunnel vision, and SEE what is going on so you may plan accordingly!