Our Stance on Your Stance 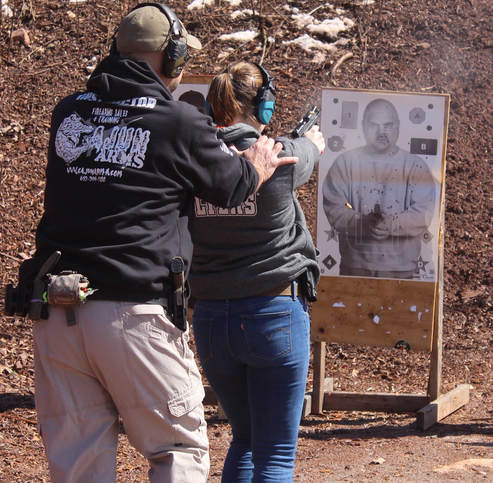 You’ve seen it. You may even do it. New or untrained shooters leaning backwards shooting stiff legged. Women seem to have bit more tendency to shoot this way but plenty of men do it also. We teach an equal amount of both men and women in our classes.

Keep in mind that we primarily teach defensive shooting at our school. Stance is the one of the fundamental foundation blocks of good shooting, no matter what your discipline. There are still instructors and schools out there  that teach the “Weaver” stance or one of its many variations. The Weaver has you turn your gun side shoulder and hip away from the target and have you stand roughly perpendicular to the target with a bent elbow. Today, most instructors will show you the isosceles stance where the shooter is square to the target with both arms extended.

Both stances work, the isosceles is more versatile. It is more athletic, allows for movement and offer the potential for faster shooting. Good stance utilizes good posture and the relationship of your joints to the gun to minimize recoil.

We encounter several variations of problematic stances in some new shooters.The most common is leaning back. Its as if the shooter want to keep the gun as far away from them as possible. After the first shot, recoil pushes the shooter back further and their shots on the target inch higher and higher above their intended mark.

So we begin the process of correcting the stance of the shooter. Oftentimes while the student is shooting. Here is the base: Shoulders square to target. Feet shoulder width apart. Wider is ok but the important aspect is to be stable and have the ability to move. Your dominant foot can be a bit forward if completely square is uncomfortable. Knees should be bent and have some flex to them. Hips should be bent in order to have your head and nose over your toes. An athletic stance!

This forward athletic stance looks aggressive. That’s ok, you need to be aggressive! You are running your gun! I’ve been told by several of our women students that their social conditioning makes them feel awkward or uncomfortable in this stance. We say, “Let's get over that and be aggressive for the duration of this class!” Imagine you are defending yourself or someone you love - get aggressive! The last part of the equation is to extend your arms with a good grip and locked wrists. Your arms should form an isosceles  triangle. This will extend recoil evenly through both arms. Your wrists should not become “soft”. This induces malfunctions in your pistol. Soft wrists also allow for recoil to raise your pistol higher than it should between shots. Elbows should be straight but not necessarily locked.

A solid stance promotes more accurate hits at a faster speed. It allows you to move if needed and minimizes felt recoil from your gun. With a good grip, stance gives you the control over your pistol rather than the other way around.

Keep practicing and we will see you in class!

SHARE ON
TwitterFacebookLinkedInPin It
<< Training for More Than One Attacker…
Lights and Lasers and YouTube Ninjas >>
Recent Posts
Website Links
Never miss a class!
JOIN OUR NEWSLETTER